If you thought 2021 was bad, just in general, you might think 2022 is even worse, if the subject happens to be mortgage rates.

They’ve started the year off with a bang, higher, and are now at their highest point in about two years.

A lot of market watchers expected mortgage rates to rise in 2022, but perhaps not this quickly and violently.

For example, the 30-year fixed finished the year 2021 close to 3%, and is now hovering around 3.5%, depending on the loan scenario in question.

It could be even higher than that depending on your FICO score and LTV ratio, and there’s fear things could get even worse.

Now I don’t want to be a sucker and try to time the market, but I’ve been thinking about this ever since mortgage rates shot up a week or so ago.

It seems like it came out of nowhere, despite the advanced warnings that the Fed would be raising rates this year.

The Fed thing was telegraphed and baked in, but the ongoing story has been inflation, which started off as “transitory” and lately became more concerning and perhaps permanent.

That has forced the Fed to get a bit more aggressive, prompting the dual stock market and bond market carnage we’ve seen lately.

At the same time, most 2022 mortgage rate predictions have called this, though just not this quickly.

There’s also a sense that the worst is behind us with COVID, even if omicron is leading to record numbers in all categories.

I’m hearing a lot of pandemic becomes endemic…emphasis on end.

So Much Bad News Yet Mortgage Interest Rates Are Higher? 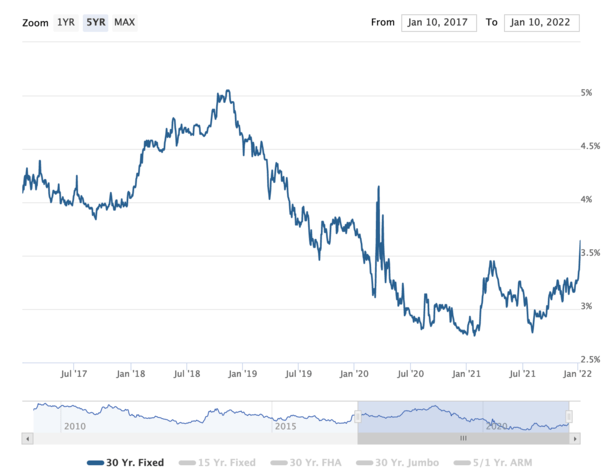 While it’s decidedly gloomy out there, here’s why I think mortgage rates might actually get cheaper next month.

If you look at short periods of volatility, they’re usually followed by a correction, whether it’s up or down. This seems to apply to most things, most notably the stock market.

Because mortgage interest rates surged so quickly, there’s a good chance they could fall back to earth for that very reason alone.

Simply put, too much selling makes something oversold and ripe for a purchase, in this case mortgage-backed securities (MBS).

Just look at this 30-year fixed chart from MND, which shows periods of rate spikes, followed by some correcting.

It’s obviously not a perfect science, and still a risk, but I could see rates taking a breather in February. Or perhaps March.

There are other factors working in favor of that argument, like surging COVID cases and hospitalizations.

Yes, we’ve all heard that the omicron variant is “mild,” but somehow daily cases are set to triple the record set a year ago.

And some 132,646 Americans are currently hospitalized with COVID, above the 132,051 record set in January of last year.

While it seems like everyone has COVID, it seems fewer are getting severe disease, despite the hospitalizations.

There’s also a sense that this was expected, seeing that we’ve been through a bad winter already. And there was much more mingling this holiday season.

That could explain why mortgage rates haven’t gone down, but UP. But give it time and things could change direction.

And I think it’d be silly to think there isn’t a next variant on the horizon, even if it’s all media hype.

There’s also that psychology when you think something can’t possibly happen that it does. And right now, it’s hard to imagine mortgage rates improving.

Mortgage Lender Competition to the Rescue?

Lastly, consider mortgage lenders for a moment. While an everyday homeowner or prospective home buyer certainly won’t like a higher mortgage rate, lenders despise them.

A big rate surge like this one will tank their loan volume in a hurry and have them wondering about rightsizing their staff.

It’ll make a cash out refinance less attractive and put a rate and term refinance out of reach for millions of homeowners.

When volume drops, lenders have to get more aggressive pricing-wise to stay afloat. It might mean making less per loan to get the loan to begin with!

And as I’ve written about before, it can be wise to apply for a home loan when it’s not busy.

Not just because your loan will get to the finish line faster, but because it should be cheaper, relatively speaking.

Why? Because the lender is willing to shrink their profit margin to get your business. When they’re slammed, they’ll maybe even ignore you.

So if it feels like all hope is lost on the mortgage rate front, it probably isn’t, for that reason alone.

When things turn around is another question. Does it happen in the next week or two, in February, or in March? Do things get worse before they get better?

I’m not sure, but I do think we could see a reprieve before the traditional home buying season gets underway in later March and April.

It might be short-lived though, so be ready to pounce if and when it happens.

Read more: What time of year are mortgage rates lowest?

Previous post Where to Find Student Loans for Flight School

AnnieMac Home Mortgage, a nationwide lender based in Mount Laurel, New Jersey, is expanding its mid-Atlantic reach through its acquisition...