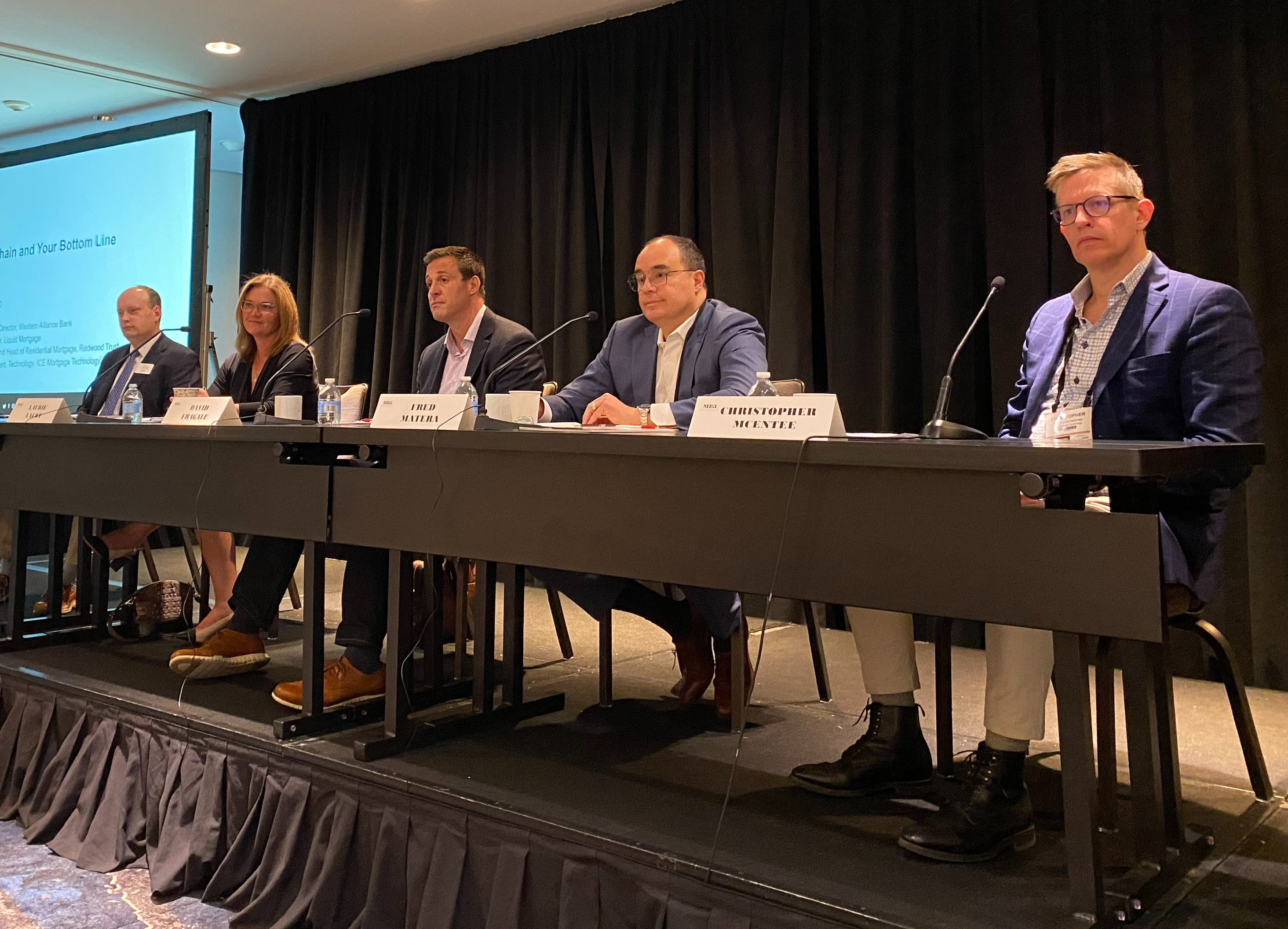 With cryptocurrencies currently under scrutiny after TerraUSD’s nosedive in value last week, cheerleaders of blockchain technology in the mortgage industry want to make it clear to any Luddites remaining that the two are very different things. Unlike crypto, which is a form of digital payment, blockchain is essentially a ledger and is separate from cryptocurrencies, the forms of digital payment, they explained at the Mortgage Bankers Association’s Secondary and Capital Markets Conference in New York City on Wednesday.

And while implementing blockchain technology across the mortgage industry comes with challenges, its increased security and efficiency could add immense value to the origination and securitization process, some of the industry’s early blockchain adopters said.

“You look at the origination side, there’s a lot of value that can be created,” said David Fragale, senior managing director of Blockchain and Digital Assets Group at Western Alliance Bank. “[The mortgage transaction] is a big hairy problem to solve with blockchain. I think that’s a long way away, but if it ever gets there, I think there’s a lot of value creation.”

Blockchain networks can vary in how they operate from a technical standpoint but function the same way, experts explained. A participant enters a transaction which is irreversible and carries with it cryptography, an encryption making it tamper-proof. Transactions are broadcast to all participants in the blockchain who then unanimously verify it and the way it was entered, and a block is added to the chain.

The chain is replicated for all participants in their own redundant copies and every move is time-stamped. The identity of participants entering transactions is anonymized but the chain displays information allowing participants to verify the entrant is authorized. Christopher McEntee, vice president of technology at ICE Mortgage Technology, called blockchain’s ability to produce a cohesive, visible audit trail “like nirvana.”

“Somebody described mortgage production, it’s 14 authors, seven editors and three copywriters putting together a novel and you’re like, ‘Well, I kind of missed some of the story somewhere,’” he said.

Firms have already executed mortgage transactions through the blockchain; at least one firm has used the technology to introduce a unique homeownership opportunity. Redwood Trust and Liquid Mortgage, which Redwood invested in last year, pioneered the use of blockchain in a $431 million, non-agency, residential asset-backed security. Liquid Mortgage is the transaction’s distributed ledger agent and provides end users with daily reporting of loan-level payments of principal and interest on the underlying mortgages, rather than the usual industry one-month delay.

Blockchain use could further lower the cost of funds for borrowers the same way mortgage-backed securities did, said Fred Matera, managing director and head of Residential for Redwood.

“I think this could lower the cost of funds yet again by making the risk transfer even more efficient,” he said. “And you could do more efficient ‘tranching’ by geography by FICO, et cetera. There’s all kinds of ways you could securitize.”

Panelists didn’t dive into certain technical aspects of how blockchain works, and Fragale suggested that there are no experts on the subject but rather professionals with varying degrees of knowledge. Experts also acknowledged the technology also carries risks, albeit in different forms.

While blockchains won’t be treasure troves of personally identifiable information, firms are still exposed if they operate on cloud providers, McEntee said. Cyber criminals have hit firms performing a variety of functions across the industry and cyberattacks are increasingly devastating. Liability is undetermined with decentralized autonomous organizations, and federal regulations for cryptocurrencies alone are just being realized.

“Some of those principles are less relevant in terms of how we apply the blockchain,” McEntee said. “I think what we’re trying to get at is the quality of the authentication. But risk will still hang around there, just in a different dimensionality.”

Previous post Student Loan Refinancing Rates are Rising: What To Do About It

Next post Student Loan Forgiveness is Probably Happening: What to do Right Now